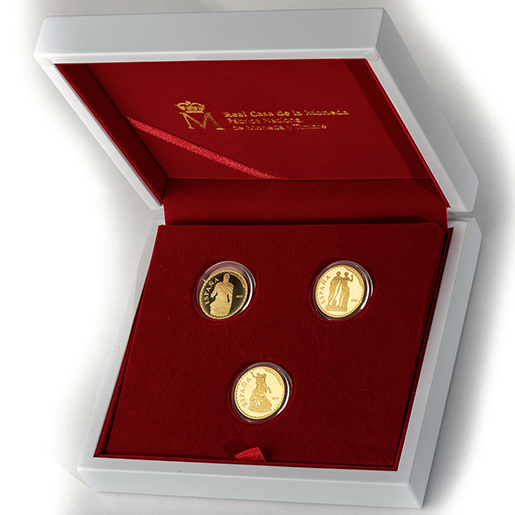 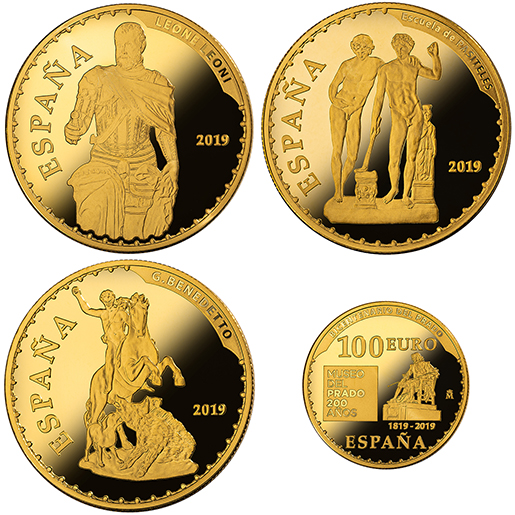 only 4 left online
Added to Your Shopping Cart
Share

The Museo del Prado opened to the public on November 19, 1819 as the Royal Museum of Painting and Sculpture. In 2019 the 200th anniversary of this spectacular and well-known museum is celebrated. To commemorate this event, the FNMT issues a collection of coins called "Bicentennial of the Prado Museum". The issue consists of three circular gold pieces and three square silver pieces, in which well-known works of the Prado Museum are reproduced.

This collection consists of the three gold coins of the emission. The following works are reproduced on the obverse:

On the first coin, a fragment of the sculptural work entitled "Carlos V", made by Leone Leoni around 1553, which is preserved in the Museo Nacional del Prado, Madrid, is reproduced.

On the second coin, an image of the sculptural work entitled "The hunting of Meleagro", made by Giovanni di Benedetto between 1583 and 1584, which is preserved in the Museo Nacional del Prado, Madrid, is reproduced.

On the third coin, an image of the sculptural work entitled "Orestes y Pílades or Grupo de San Ildefonso", made by the School of Pasiteles around 10 BC, which is conserved in the Museo Nacional del Prado, Madrid, is reproduced.

On the reverse (common to the three pieces), the logo of the Bicentennial of the Prado Museum is reproduced together with an image of the seated statue of Velázquez, made by Aniceto Marinas in 1899 and located in front of the Velázquez Gate of the National Museum of the Prado, of Madrid.