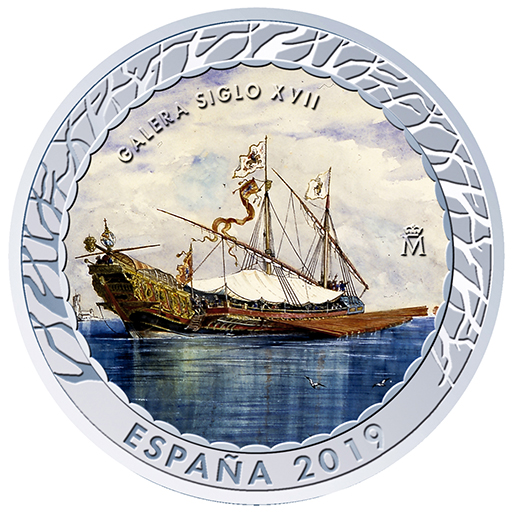 On the obverse is reproduced in colors a detail of the work entitled "Renaissance. Large seventeenth century galleys. Watercolor ", which is preserved in the Naval Museum of Madrid. Above the central image, the legend GALERA ESPAÑOLA SIGLO XVII (SPANISH GALLEY XVII CENTURY).In the lower part, the legend ESPAÑA and the year of minting 2019.

Period: From the sixteenth to the nineteenth centuries.
Length: 40 m Beam: 6 m
Draught: from 2 to 3 m.
Propulsion: Sails and oars.
Weaponry: Ram (the usual weapon for charging at the enemy), artillery and troops’ weapons (harquebus).

Description: Used over a longer period than any other vessel, the galley was the main component of the war fleets in the Mediterranean. With references dating back to the times of Homer, the galley was in use from Antiquity (biremes and triremes) to the early nineteenth century.

Its golden age came in the sixteenth and seventeenth centuries, with Spanish galleys sailing the Seven Seas, from the Caribbean to the Pacific. However, its main theatre of operations was the Mare Nostrum, above all in battles between Christians, Turks and Barbary pirates, having its great moment of glory at Lepanto with sailors of the likes of Gelmírez, Bonifaz, Jofre Tenorio, Enríquez, Roger de Lauria and Álvaro de Bazán, who would write some magnificent pages into Spanish history.

Designed for warfare, the galley had a shallow draught and tailwind sails which would be lowered before combat commenced.

The hull was exceptionally long so as to support the framework of the oarsmen’s banks which ran along almost its entire length. They were classified in accordance with the number of banks. Amongst those deployed at Lepanto, worthy of special note are the standard one (24 to 26 banks) and the Royal one, named in honour John of Austria (30 banks).

The command post was on the superstructure of the poop deck, covered by a canopy or awning and decorated in relief and sculptures. The lantern, located at the end of the poop deck, was lavishly decorated and, together with the flags and standards, formed the insignia of command. When travelling, the fleets of galleys would sail in line formation. For combat, so as to prevent an attack from the stern, the flagship would take up the central position while the other galleys would arrange themselves into a formation of five groups: the vanguard; a squadron for exploration and reconnaissance; the body of the formation, made up of the central squadron, flanked by the two wings; and in the rearguard, the reserve squadron.

Due to the fact that the battles waged in the Mediterranean at that time were between Christians and infidels, the Christian contingent was referred to as the cross formation and the Ottoman contingent as the half-moon formation as the tips of the wings would turn inwards in respect of the centre. In most instances, victory was secured by the one better skilled in the use of light artillery and bladed weapons when boarding the enemy ship, essential in close-quarter combat.