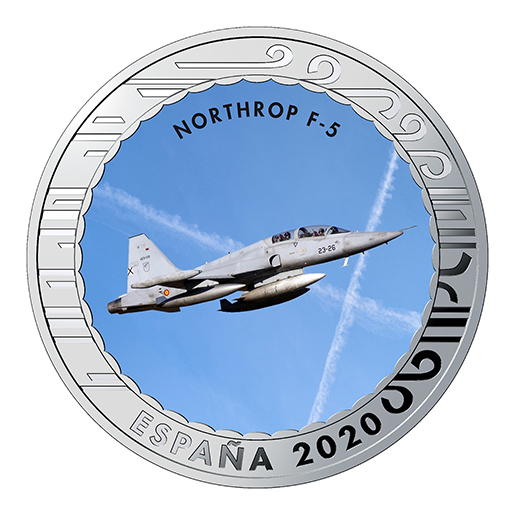 An image of a Northrop F-5 is reproduced in color on the obverse. At the top, the legend NORTHROP F-5. At the bottom, the legend ESPAÑA and the year of minting 2020 appear. The motifs and legends are surrounded by geometric figures symbolizing the shapes of the clouds.

Supersonic twin-engine light fighter aircraft designed by the US firm Northrop in the early 1960s, of which it manufactured 836 units until 1982. It has flown in more than 35 coun- tries, among them Spain, where it is still in service.

The Spanish company Construcciones Aeronáuticas S.A. (CASA) manufactured 62 units under licence of its A (18 single-seat), B (34 two-seat) and RF-5A (18 photographic re- connaissance) versions of a total of 70 acquired (the first 8 units arrived from the USA). This aircraft replaced the T-33 and F-86 “Sabre” for air defence and was brought into service in 1970. Eighteen of these aeroplanes were deployed in Gando airbase during the Spanish Sahara conflict in 1976 and undertook more than 500 real combat operations.

All single-seater F-5 units were decommissioned in Spain in the 1990s. Currently in ser- vice in the Jet School (Wing 23) of Talavera la Real (Badajoz) are 19 modernized (BM) B-version units for advanced training of fighter pupils. This modernization carried out in the 2000s affected the structure and engines, and analogue avionics were replaced with digital versions in the cabins and the former ejection seats were changed to 0/0 ejection seats. This will keep the F-5BM operational until 2025.