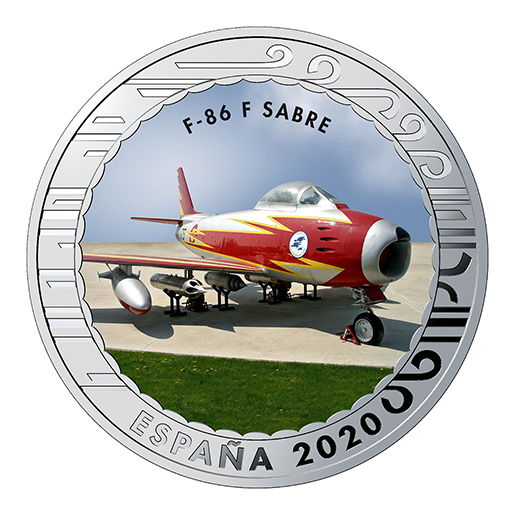 On the obverse an image of the F-86 F Sabre reactor is reproduced in color. At the top, the legend F-86 F SABRE. At the bottom, the legend ESPAÑA and the year of minting 2020 appear. The motifs and legends are surrounded by geometric figures symbolizing the shapes of the clouds.

A transonic fighter jet manufactured in the US by the company North American Aviation for the USAF in the 1940s, in service in more than 30 countries, among them Spain.

Following the cooperation agreements (Pact of Madrid) with the USA in 1953, Spain started to receive the first military jets, the Lockheed T-33 “Shooting Star” used as training planes at the Talavera la Real (Badajoz) jet school founded in 1953.

June 1955 saw the arrival at the Getafe (Madrid) airbase of the two first North American F-86 F “Sabre” jets out of a total of 270 jets that joined the different Units between 1955 and 1959, with this one being the first jet fighter plane to serve in the Spanish Air Force.

Incorporating this modern aircraft, which experienced its baptism of fire in the Korean war, represented a major qualitative leap in flying techniques, operations, maintenance and use of armament in the Spanish Air Force. It was the backbone of Spain’s air defence in the 1960s. It was withdrawn in 1973.

In 1956 the first Spanish Air Force acrobatics air patrol was created, which in 1958 was renamed “Ascua” (Ember), with F-86 F “Sabre” material which livery can be seen in the picture.

6 M3 Browning machine guns with 1602 12.7-mm-calibre bullets and 4 external under- wing hardpoints for 2,400 Kg of combinations of bombs of various types, rockets and air-to-air missiles (Sidewinder and Shafir)