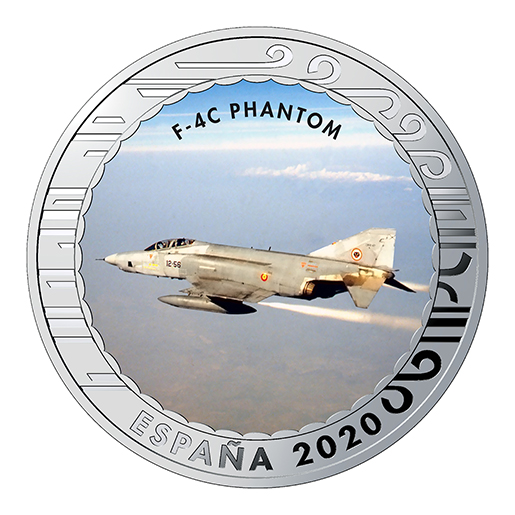 On the obverse an image of an F-4C Phantom is reproduced in color. At the top, the legend F-4C PHANTOM. At the bottom, the legend ESPAÑA and the year of minting 2020 appear. The motifs and legends are surrounded by geometric figures symbolizing the shapes of the clouds.

A supersonic, two-seat, twin-engine, long-range fighter-bomber, with the pilot in front and the weapons systems officer behind (Air Force version) or radar intercept officer (Navy version), with capability for in-flight refuelling. originally developed for the United States Navy by McDonnell Aircraft Corporation. It first entered into service in 1960 on board aircraft carriers. Due to its success it also served in the Marine Corps and in the US Air Force, which retired it from service in 1996. It remains in service in the air forces of a few countries: Turkey, Iran, Japan, Greece and South Korea. A total of 5,195 units were built between 1958 and 1981 in the US and Japan.

From 1959 onwards the F-4C set 15 world records, including the record for absolute speed at 2,585 Km/h and one for absolute altitude at 30,000 m, which were not broken until five decades later.

It was used massively in the Vietnam war as an air superiority fighter jet and also in ground attack missions, and was kept in combat until the first Gulf War in 1991, in its version of “Wild Weasel” air defence suppression. It was the only aircraft to simultaneously form part of two acrobatic air patrols: the US Navy Blue Angels and the USAF Thunderbirds.

In Spain the F-4 “Phantom” served in Wing 12 of Torrejón in two versions: F-4C fighter bomber and RF-4C aerial reconnaissance, the latter equipped with cameras but no arma- ment. The F-4C arrived in Spain between 1971 and 1972 and the RF-4C in 1978. It was decommissioned in 2002.

One M 61 “Vulcan” rotary cannon and 8,400 kg of weapons on nine external hardpoints for air-to-air and air-to-ground missiles and several types of bombs