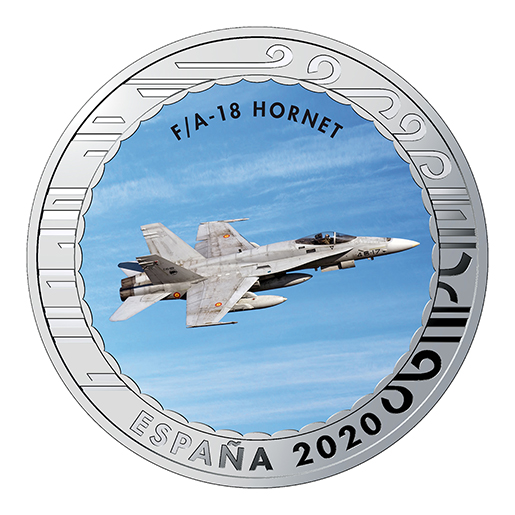 On the obverse an image of an F/A-18 Hornet is reproduced in color. At the top, the legend F/A-18 HORNET. At the bottom, the legend ESPAÑA and the year of minting 2020 appear. The motifs and legends are surrounded by geometric figures symbolizing the shapes of the clouds.

MCDONNELL DOUGLAS F/A 18A & B HORNET

The F/A-18 was, and continues to be in its different versions, the standard all-purpose fighter jet of the fight and attack squadrons of the United States Navy and US Marine Corps as well as of the air forces of Australia, Canada, Finland, Kuwait, Switzerland, Ma- laysia and Spain.

Spain acquired them as a result of a painstakingly thorough programme denominated Fu- ture Fight and Attack Aircraft (FACA) for selecting a model that would replace the various fighter jets in the Air Force combat units in the early 1980s and thus for standardizing the fleet in this speciality insofar as possible.

Although the experts recommended purchasing 144 units from the manufacturer, ultima- tely half that figure was acquired: 60 single-seat EF-18As and 12 two-seat dual-control EF-18Bs. The first six (all of them two-seaters) arrived in Zaragoza in July 1986 and cons- tituted the first planes of Wing 15, which was completed in successive deliveries that also augmented the material of Wing 12 of Torrejón. In Spain both versions are denominated

At a later date, between 1995 and 2000 24 additional F/A-18As were acquired, surplus units from the United States Navy and Marine Corps, which went to the 462 Squadron of Wing 46 in Gando.

Maximum range: 3,700 km, with supplementary tanks and without external loads

One 20-mm M61A1 cannon and nine external load hardpoints (six in the wings and three in under-fuselage), with capacity for a maximum of 7,500 kg.