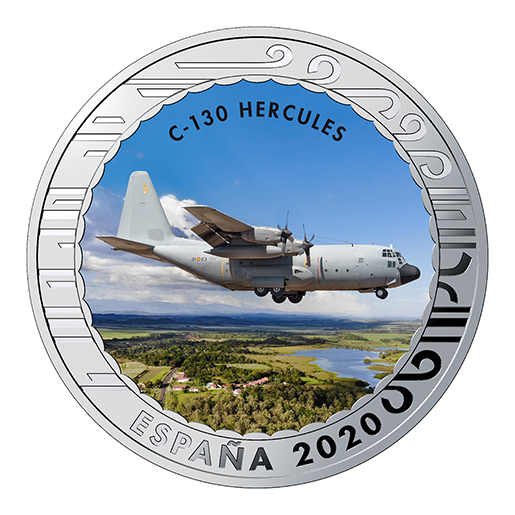 On the obverse an image of a C-130 Hercules is reproduced in color. At the top, the legend C-130 HERCULES. At the bottom, the legend ESPAÑA and the year of minting 2020 appear. The motifs and legends are surrounded by geometric figures symbolizing the shapes of the clouds.

The Hercules is the world workhorse and serves as the selection tactical bridge for ope- rators in 70 nations around the world. With more than 2,600 C-130s delivered to date, the aircraft is still in production with the C-130J Super Hercules flown by 25 operators in 21 countries.

In Spain, and specifically in the Air Force, it has been serving since December 1973, when the first C-130 was received. Since then, and until March 1988 when the last of the thirteen aircraft came into service, the Spanish C-130 fleet has been based in Zaragoza, part of 301 Squadron first and later with Wing 31 for 311 Squadron and 312 Squadron which replaced it after its creation on 7 September 1978. 312 Squadron is currently chan- ging its C-130 fleet to one comprising the Airbus A400M.

Five of our aircraft are a mixed transport and in-flight refuelling version called KC-130H by the USAF and TK.10 by the Air Force. Of the other eight, seven were the pure material and personnel transport C-130H version (T.10 in Spain) and one of the C-130H-30 or TL.10, with an stretched fuselage (4.57 metres longer).