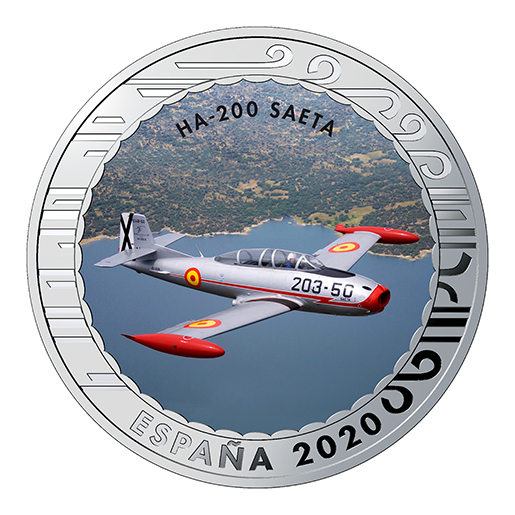 On the obverse an image of an HA-200 Saeta aircraft is reproduced in color. At the top, the legend HA-200 SAETA. At the bottom, the legend ESPAÑA and the year of minting 2020 appear. The motifs and legends are surrounded by geometric figures symbolizing the shapes of the clouds.

It was in service for 19 years (1962-1981). The legal limitations imposed on the German designer after World War II prevented him from developing a project with a more power- ful aircraft engine and he had to settle for adopting the Turboméca Marboré engine with 400-Kg thrust fitted in the French Fouga “Magister” training plane. However, the “Saeta” was one of the most modern advanced training aircraft of its time.

With Egypt it took part in the 1967 Arab-Israeli conflict and later, in the 1970s, the “Sae- tas” with their base in Gando (Gran Canaria) would play an important role in the Spanish Sahara conflict where, for political reasons, Spain was unable to use the modern US F-86 “Sabre” material. From the Gando airbase, the home of 462 Squadron, reconnaissance and ground-attack missions were undertaken with great precision.

The single-seater, tactical-support HA-220 “Super Saeta” version, was produced from 1971 to 1977, with two variants, HA 220 E (C.10B), which had Oerlikon air-surface under-wing rocket launchers, and the photographic-reconnaissance HA 220 (AR.10 C). The back seat of the HA 220 “Super Saeta” was used for housing a self-sealing fuel tank.