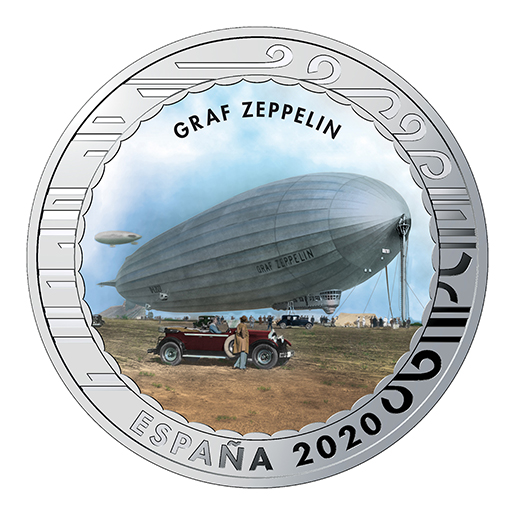 On the obverse an image of the German airship Graf Zeppelin is reproduced in color. At the top, the legend GRAF ZEPPELIN. At the bottom, the legend ESPAÑA and the year of minting 2020 appear. The motifs and legends are surrounded by geometric figures symbolizing the shapes of the clouds.

A German, early-20th-century airship. It made its maiden flight on 18 September 1928. In its 600 trips, it flew 150 times over the Atlantic Ocean. In 1936 it established a regu- lar cargo and postal service line between Europe and South America. It was the largest airship of its era.

It had the capacity to carry 20 passengers and 40 crew.

The tragic fire of another great German airship, the Hindenburg, caused by static elec- tricity while anchored to the mooring mast in New Jersey, killed 36 people and brought passenger transport to a halt. “Graf Zeppelin” was consequently dismantled in 1940, putting an end to the era of the airships.