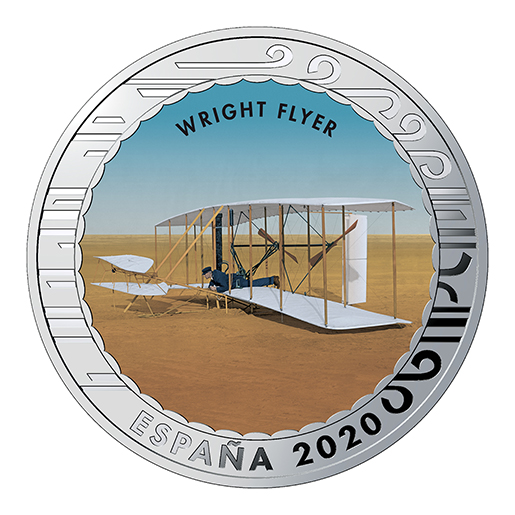 On the obverse an image of Wilbur Wright at the controls of the Wright Flyer is reproduced in color, days before December 17, 1903, when he and his brother Orville made the first powered flight in history. The image is from the collection of the Smithsonian National Air and Space Museum Archives. At the top, the legend WRIGHT FLYER. On the outside of the coin, a series of geometric motifs symbolize the shapes of the clouds and, at the bottom, the legend ESPAÑA and the year of minting 2020 appear.

The North American brothers Wilbur and Orville Wright are considered the parents of aviation for having pioneered the first sustained flight in a heavier-than-air aircraft, the “Flyer I”, by taking to the air initially launched by a catapult and afterwards powered by a two-blade, twin propeller engine.

This historic milestone, which marked the start of aviation, took place on 17 December 1903 on the plains of Kitty Hawk in North Carolina (USA). The “Flyer I” remained in the air for 59 seconds and travelled 260 metres.

The Wright brothers’ greatest achievement for aviation was to succeed in controlling the turn by warping the wings and simultaneously turning the rudder and, of course, powe- ring the aircraft with a combustion engine.

The plane reproduced in the coin was called Flyer and was used for testing the days be- fore the final flight, being damaged in the last one.