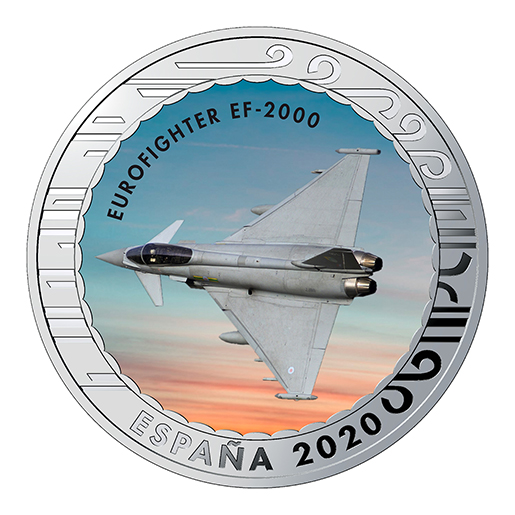 On the obverse an image of a Eurofighter EF-2000 is reproduced in color. At the top, the legend EUROFIGHTER EF-2000. At the bottom, the legend ESPAÑA and the year of minting 2020 appear. The motifs and legends are surrounded by geometric figures symbolizing the shapes of the clouds.

Resulting from cooperation among Germany, Spain, Italy and the United Kingdom, the EF-2000 is a fifth-generation multirole fighter equipped with technological novelties such as, for example, fly-by-wire instead of mechanical flight control and the canard-delta wing configuration that gives it exceptional manoeuvrability.

The Spanish Air Force acquired 72 standard units, 58 of them single-seaters and the other 14 dual-control two-seaters, which constitute the basic complement of Wings 11 (Morón airbase) and 14 (Albacete airbase). The final fitting-out of all of them was undertaken in the factory that Airbus Defence Systems (formerly Airbus Military) has in Getafe

It is likely that in the near future, in order to replace the veteran F/A-18As of Wing 46 in Gando, and depending on budget availability, the Air Force will acquire a few more units.

Two dual-flow Eurojet EJ200 engines with 9,080 kg maximum thrust with afterburner each one.

One 27-mm Mauser canon and thirteen external load hardpoints (eight in the wings and five in under-fuselage), with capacity for a maximum of 7,500 kg.