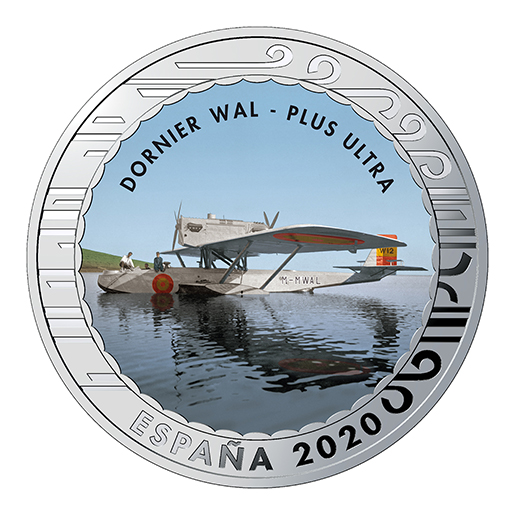 On the obverse an image of the Dornier Wal Plus Ultra seaplane is reproduced in color. At the top, the legend DORNIER WAL - PLUS ULTRA. At the bottom, the legend ESPAÑA and the year of minting 2020 appear. The motifs and legends are surrounded by geometric figures symbolizing the shapes of the clouds.

Spanish Military Aeronautics seaplane manufactured in Germany by Dornier, “Wal” mo- del, which made the flight from Europe to South America for the first time in history, con- necting Palos de la Frontera (Spain) with Buenos Aires (Argentina). The flight’s primary objective was to strengthen ties between Spain and the young Latin American nations.

The “Plus Ultra” took off from Palos de la Frontera (Huelva) on 22 January 1926, emu- lating Columbus’s voyage, and after flying 10,270 Km with several stopovers and em- ploying around 60 hours at an average speed of 172 Km/h, it reached the River Plate in Buenos Aires on 19 February 1926.

Twin-engine seaplane powered by two 450-hp Napier engines mounted in tandem back to back, the front one with a tractor propeller and the back one with a pusher propeller