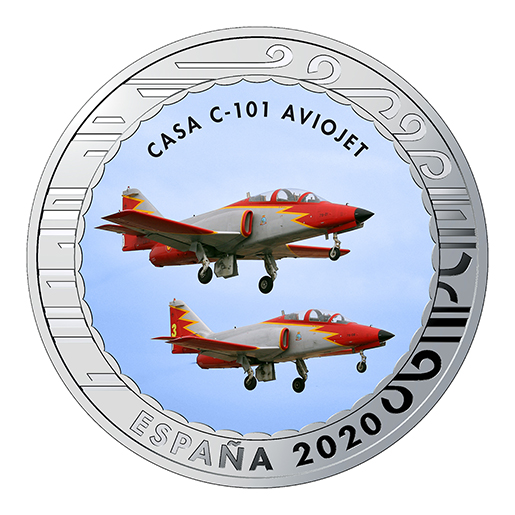 On the obverse an image of two CASA C-101 Aviojet aircraft is reproduced in color. At the top, the legend CASA C-101 AVIOJET. At the bottom, the legend ESPAÑA and the year of minting 2020 appear. The motifs and legends are surrounded by geometric figures symbolizing the shapes of the clouds.

Seeking to find a replacement for the aircraft employed by the Air Force as basic training craft (essentially the North American T-6 and the Spanish HA-200 Saeta), in the mid- 1970s the Air Force Ministry commissioned CASA to come up with the design of a new model, which became the C-101.

The first of the four prototypes built flew for the first time on 27 June 1977 from Getafe. In total the Air Force acquired 88 units of the C-101EB version –which it denominated E.25– and which it received between March 1980 and December 1983.

They served, and continue to serve, in the Air Force Academy (793 Squadron and Águila Air Patrol) as well as in 41 Group, then 741 Squadron of the Matacán Group of Schools.

Since June 1985 the C-101EB is the aircraft of the “Patrulla Águila” Air Patrol, the ambas- sador of Spanish military aviation beyond our borders, which began its exhibitions with four aircraft and currently does so with seven.