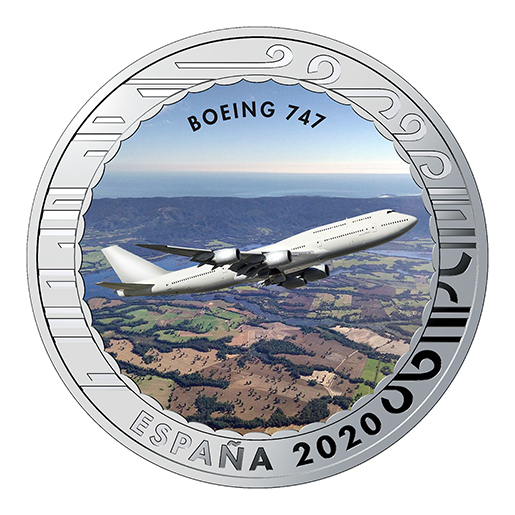 On the obverse an image of a Boeing 747 is reproduced in color. On the upper part, the legend BOEING 747. At the bottom, the legend ESPAÑA and the year of minting 2020 appear. The motifs and legends are surrounded by geometric figures symbolizing the shapes of the clouds.

Commercial cargo and passenger four-engine transport aeroplane. The first aircraft with a wide fuselage (passenger cabin with two corridors) and with two cabin levels. It made its first commercial flight in 1970. It was in service with civil companies of many countries worldwide and was in production from 1969 until 2017, with 1,542 units of 10 different versions for cargo and passengers. The B 747-8 operated by Lufthansa since 2012 is the sixth and last generation of this magnificent plane.

Its large size earned it the “Jumbo” nickname. The earliest versions carried a technical crew of 2 pilots, 1 flight engineer and 1 radio navigator. Later versions, with avionics and systems modifications, reduced the crew to two pilots.

The B 747 was the first aeroplane to use turbofan engines with a high bypass ratio, fewer pollutants and less noisy than conventional turbojets. It marked a turning point in world- wide air transport and was the safest, most reliable aircraft of its time.

The B 747 was operated in Spain by the airline Iberia, which gave its first three units the names of men of letters from the Spanish Golden Age: Cervantes, Calderón de la Barca and Lope de Vega. They were operational from 1970 to 2006. The last B 747: 412, a flight from Havana, touched down in Barajas on 7 July 2006, bringing to an end almost 36 years of service with Iberia.

Depending on version, four Pratt & Whitney, Rolls-Royce or General Electric turbofan engines were mounted, with 30,000 kg of thrust per engined.