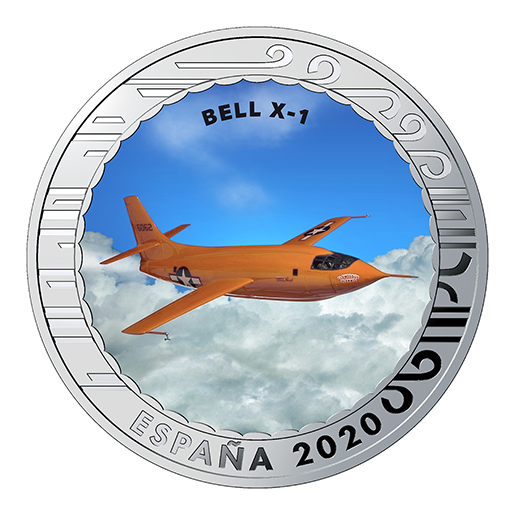 An image of a Bell X-1 is reproduced in color on the obverse. At the top, the legend BELL X-1. At the bottom, the legend ESPAÑA and the year of minting 2020 appear. The motifs and legends are surrounded by geometric figures symbolizing the shapes of the clouds.

On 14 October 1947, taking off from the Muroc Field Base (today Edwards Base), the Bell X-1 experimental plane was the first aircraft in history to exceed the speed of sound, reaching 1,127 Km/h (Mach 1.06) at an altitude of 13,000 m, which produced the cha- racteristic “bang” when it broke the sound barrier above the Mojave desert. It had pre- viously been launched into the air at an altitude of 7,000 m from the cargo hold of a transformed Boeing B-29 “Superfortress” bomber. It had straight short wings (with an 8.5-m wingspan) and was painted in a bright orange colour for greater visibility so that it could be located in case of accident.

On this flight the X-1 was piloted by the USAF captain Charles E. “Chuck” Yeager, who gave the plane the nickname of “Glamorous Glennis” in tribute to his wife. Later, on 26 March 1948, with Yeager at the flight controls, the X-1 attained a speed of 1,540 Km/h (Mach 1.45) at an altitude of 21,900 m. This speed and altitude had never previously been achieved by a manned aircraft. Today the Bell X-1 is on display in the Smithsonian Institute of Washington D.C. (USA).

One XRL-11 rocket engine with four liquid- oxygen combustion chambers and a mixture of water and alcohol with 6,000 pounds of thrust