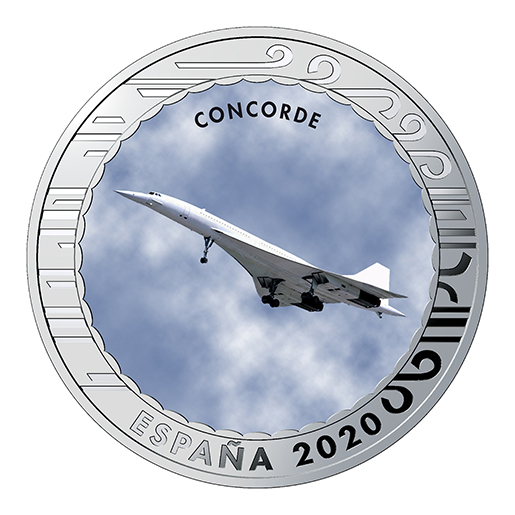 On the obverse an image of the Concorde is reproduced in color. At the top, the legend CONCORDE. At the bottom, the legend ESPAÑA and the year of minting 2020 appear. The motifs and legends are surrounded by geometric figures symbolizing the shapes of the clouds.

Concorde was the first and, so far, the only commercial passenger plane capable of su- personic flight.

Its development resulted from Anglo-French collaboration in this field, through the Bri- tish Aircraft Corporation (BAC) and Sud Aviation (shortly thereafter to become part of Aerospatiale), plus the SNECMA and Rolls-Royce engine manufacturers that signed an agreement in 1962 for this undertaking project.

Its cabin could hold 100 passengers, all of them in first class.

Regrettably, despite the unquestioned advance it represented in the world of commercial aviation, its success was short-lived due to the high price of the tickets and the equally high cost of acquiring the aircraft. In addition, unfortunately it was a dreadful accident that brought down the curtain on this aircraft: it happened in Paris on 15 August 2000, killing all of its occupants.