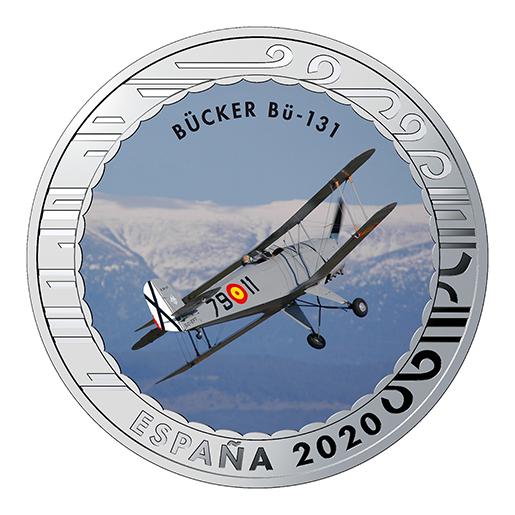 On the obverse an image of the Bücker Bü-131 biplane aircraft is reproduced in color. At the top, the legend BÜCKER Bü-131. At the bottom, the legend ESPAÑA and the year of minting 2020 appear. The motifs and legends are surrounded by geometric figures symbolizing the shapes of the clouds.

An aircraft created in 1933 by the German Carl Clemens Bücker, a naval officer and sea- plane pilot during World War I, in his enterprise Bücker Flugzeugheu GMBH. The develo- pment of the first prototype of the Bü-131 “Jungmann” (“young man”) started in Berlin in 1934, coinciding with Germany’s need to have a plane on which to train pilots for the new Luftwaffe that emerged after Hitler’s rise to power in 1933.

In only 4 months the first prototype was built, a two-seater biplane with wings in a slight arrow configuration, seats in tandem and a fuselage in steel tube covered in fabric except for the engine area, the fuel tank and the cockpit sides, which were faired in aluminium sheeting. It was a very light, agile aircraft, very easy to manoeuvre, with excellent acrobatic qualities, especially its twin, the single-seater Bücker Bü-133 “Jungmeister”. For this reason it was acquired by the majority of both civil and military flight schools. It was the greatest export success of the German aeronautics industry, which built between 3,000 and 4,000 units in Germany alone. It flew in 23 countries, among them Spain, which was licenced to build it in the CASA factory of Puntales (Cádiz), where 450 units were built over 23 years (1940-1963).

All the pilot officers of the Air Force between 1945 and 1976 were trained in this magnifi- cent aircraft at the General Air Academy. In 1976 it was transferred to Armilla (Granada), after having trained more than 2,000 pilots and having amassed 175,000 flight hours. It was permanently withdrawn from the Air Force in 1986 after almost half a century of servi- ce. However, this aeroplane continues to fly more than 80 years after the first Bücker “Jung- mann” was built, with barely any mechanical or structural modifications having made on it.