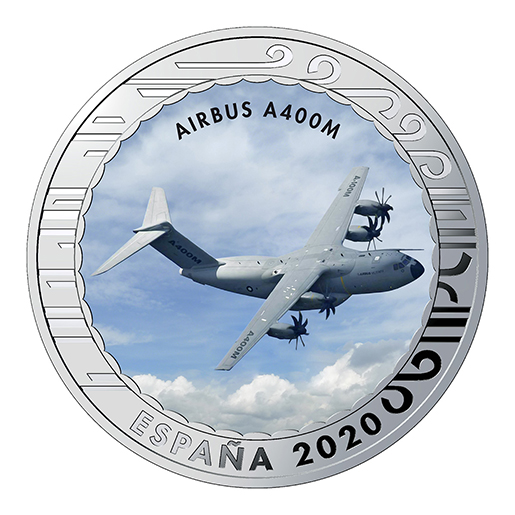 On the obverse an image of an Airbus A400M is reproduced in color. At the top, the legend AIRBUS A400M. At the bottom, the legend ESPAÑA and the year of minting 2020 appear. The motifs and legends are surrounded by geometric figures symbolizing the shapes of the clouds.

The origins of the project go back to 1982, when several European aeronautics compa- nies and the US company Lockheed initiated contacts to collaborate on developing the replacement for the C-130 and the Transall C-160. Finally Lockheed withdrew from the group, which ultimately comprised companies from France, Germany, Spain, Belgium, Turkey and United Kingdom, nations which since November 1996, together with Lu- xembourg and Malaysia, constitute the Organisation for Joint Armament Cooperation (OCCAR).

The A400M is an advanced aircraft for transport (both personnel and material) that also has the capability to act as an aerial refuelling tanker for other aircraft. It is equipped with fly-by-wire and data presentation on the visor situated at the pilots’ eye level, and it can operate from short-length, unprepared runways.

The final assembly of the manufactured units is carried out in the factory of Airbus Mili- tary (today ADS) situated in the Seville airport of San Pablo, from which it made its mai- den flight on 11 December 2009.

Spain made a firm commitment to acquire 27 for its Air Force, of which fourteen are planned to be brought into service (nine in a pure transport version and five as tankers, denominated T.23 and TK.23 respectively). The other thirteen will be put up for sale to third countries.