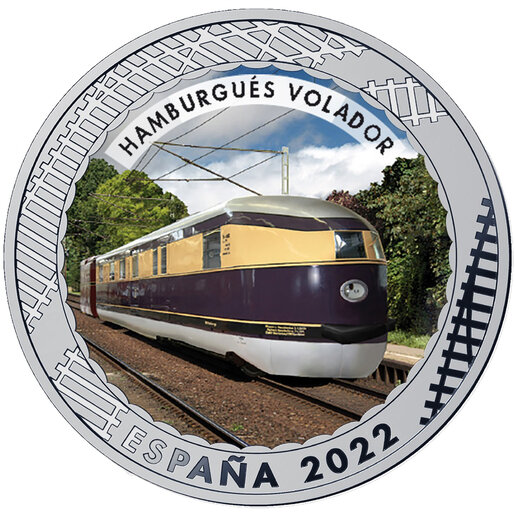 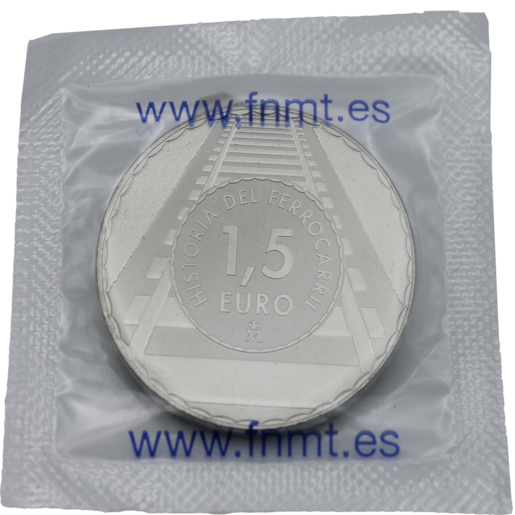 The obverse features a colourful image of the FLYING HAMBURGER (Fliegender Hamburger), which is considered to be one of the world's first German-built railcars. Above the central image is the legend FLYING HAMBURGERS. On the outer part of the coin are motifs reminiscent of railway rails. 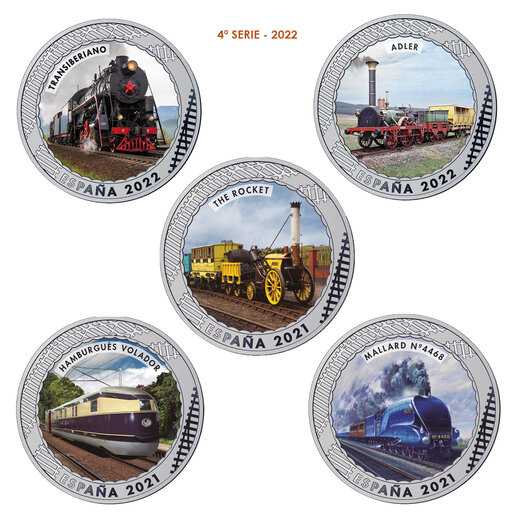 Germany led the field when it came to developing
internal combustion in Europe. In terms of the
railway, its application began in 1931 when Julius
Heinrich Dorpmöller, Chairman of German State
Railways, commissioned the company Wagen und
Machinenbau, AG to design a diesel power car.
One year later, this major industrial company
completed its commission and presented the Fliegender
Hamburger (Flying Hamburger). It had produced
a diesel-electric power car with two articulated
coaches. The power car was equipped with two
12-cylinder, 410 hp Maybach engines, one mounted
at each end of the bogies. Each one of the engines
drove a generator which, in turn, fuelled each of the
traction engines, located on the axle nearest to the
articulated bogie, thereby meeting the aerodynamic
needs arising from the power car’s weight.

The Flying Hamburger could haul a total weight of
78 tonnes and just over 100 passengers (98 in second
class and four in the small buffet car). Complete
with a bar, its livery was mauve and cream, giving
it a highly distinctive appearance. It succeeded in
covering the distance from Berlin to Hamburg
(270 km) in two hours, 18 minutes; i.e., at an
average commercial speed of 124.6 km/h, a record
at the time. Its top speed was 160 km/h, although it
reached175 km/h at the factory trials.
In view of its immediate success, the German state
operating company ordered a further 17 units
so as to extend the service to other routes, such as
Berlin-Hanover (254 km in one hour 55 minutes);
and Berlin-Munich (1,369 km at an average speed
of 103.8 km/h). After the Second World War, they
were unable to continue operating as high-speed
trains and were withdrawn from service in the mid-
1950s. One of the units is on show at the German
National Railway Museum in Nuremberg.