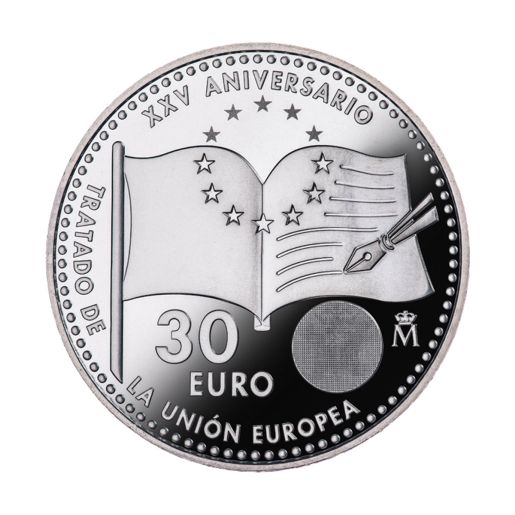 On the reverse, in the centre, an artistic composition in which the European Union Treaty is depicted by a flag in the form of a document and a pen poised for signing; the 12 stars of the European Union appear at the top of the flag. Beneath, to the right, a circle containing the initials UE, the mint mark, a five-pointed star and the number 17 in the form of a quadruple latent image.

February 7 2017 marked the 25th Anniversary of the Maastricht Treaty. A quarter of a century has passed since the signing of an agreement which has consolidated the EU, both internally and externally, to make it into an example of democracy and strength. It was not just about the euro but also the concept of a citizenry and defence of Europe.

The treaty led Europe's citizenry into the integrating concept of community legislation.

The text, known officially as the Treaty of the European Union (TEU), guaranteed that all nationals of the EU's member states would enjoy the status of European citizens.

It meant a change in the road map of the EU, previously known as the European Economic Community, endowing its original economic nature with a political dimension.

The EUT reaffirmed the right of European Union citizens to "move and reside freely in the territory of the member states" and to benefit from diplomatic protection in countries where his/her member state is not represented.

Furthermore, it enhanced the powers of the European Parliament (EP), which became the body tasked to exert political control of the Community Executive and enabled European citizens to elect and be elected in the local elections of the EU country in which they live, even if that country is not their country of origin.

The Maastricht Treaty, which came into force in 1993 and was subsequently modified under the Treaties of Amsterdam (1997), Nice (2001) and Lisbon (2009), was "the turning point" and "changed everything" because "it opened the door to greater integration".
€52.01