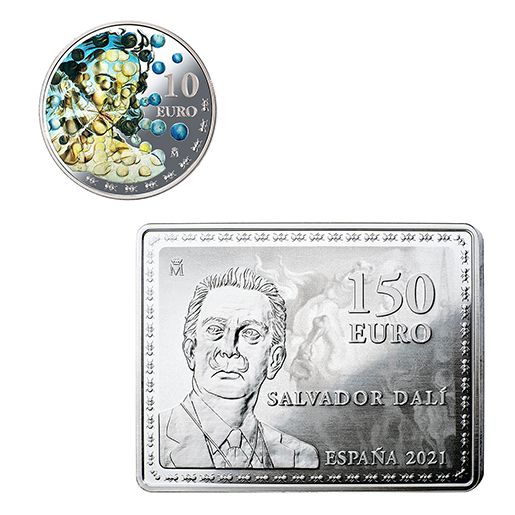 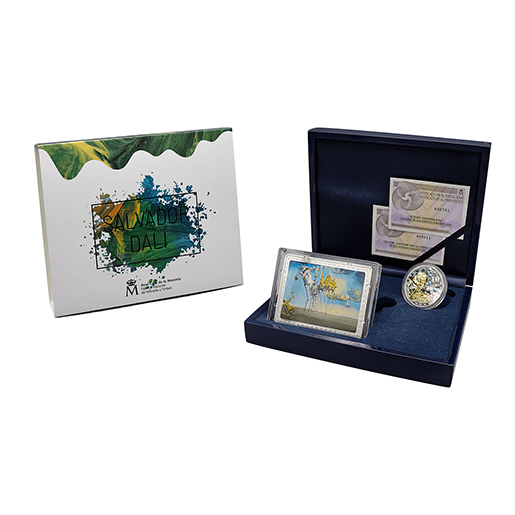 F.N.M.T. – R.C.M. is issuing a series of collector coins as a tribute to Salvador Dalí. The set consists of two silver coins: a rectangular one weighing half a kilo (999 thousandths silver) and an 8-real one (925 thousandths silver).

F.N.M.T. – R.C.M. is issuing a series of collector coins as a tribute to Salvador Dalí.

On the obverse, an image of Salvador Dalí’s painting, The Temptation of St. Anthony, which is kept at the Royal Museums of Fine Arts, Brussels (Belgium). The image is surrounded by a border in the form of ants in procession.

On the reverse, to the left, a portrait of Salvador Dalí by photographer Melitó Casals. In the background of both the portrait and the legends, there is a detail from the painting The Temptation of St. Anthony. The devices and legends are surrounded by a border in the form of ants in procession.

The Temptation of St. Anthony is a surrealist painting produced by artist Salvador Dalí in 1946. This oil on canvas is kept at the Royal Museums of Fine Arts, Brussels (Belgium). With this painting, Dalí took part, for the first and only time, in a competition to create a work of art with the temptation of St. Anthony as the theme. The winning painting would appear in the film based on the novel Bel-Ami by Guy de Maupassant. The winner of the competition was Max Ernst.

F.N.M.T. – R.C.M. is issuing a series of collector coins as a tribute to Salvador Dalí.

On the obverse, a portrait of Salvador Dalí by photographer Melitó Casals; to the right, at the top, Dalí’s signature. In the background, an allegory to Salvador Dalí’s work The disintegration of the persistence of memory. The devices and legends are surrounded by a border in the form of ants in procession.

On the reverse, a detail from Salvador Dalí’s painting Galatea of the Spheres, kept at Teatro-Museo Dalí, Figueres. Dalí produced Galatea of the Spheres in 1952. The work shows a bust of Gala made up of a matrix of spheres seemingly suspended in space. The devices and legends are surrounded by a border in the form of ants in procession. 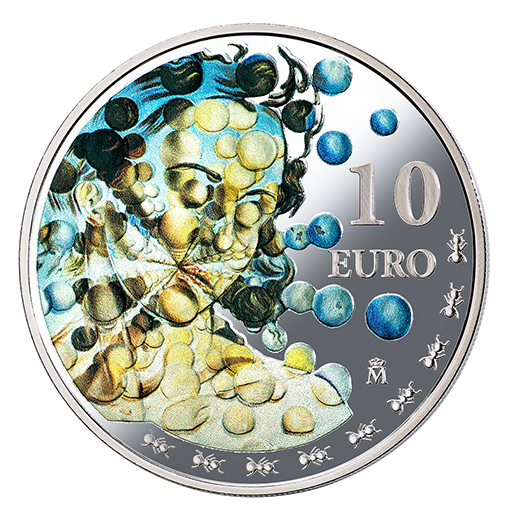 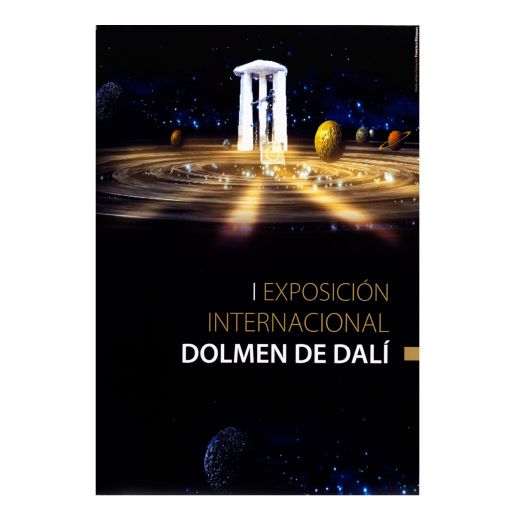 Salvador Dalí i Domènech (Figueras, May 11 1904 to January 23 1989) was a twentieth-century Spanish painter, sculptor, engraver, stage designer and writer. He is considered to be one of the leading exponents of surrealism.

Salvador Dalí is known for his impactful, oneiric surrealist images. His pictorial skills are usually attributed to the influence of Renaissance art, which the painter greatly admired. He was also an expert draughtsman. In addition, Dalí’s plastic skills came to the fore in film, sculpture and photography, leading him to numerous collaborations with other audiovisual artists

From the late 1920s, Dalí gradually brought a number of strange or incongruous images into his work which lend themselves to a symbolic interpretation. While some of these images might point to a direct Freudian interpretation, others (such as lobsters, rotting donkeys and sea urchins) are idiosyncratic and have been interpreted in various ways.

One of his recurrent symbols is the elephant. Inspired by Gian Lorenzo Bernini’s Oblelisk in Piazza della Minerva, Rome, Dalí’s elephants usually appear with “long, almost invisible legs of desire”, carrying obelisks on their backs. Combined with these delicate extremities, they create a sense of spectral unreality.

Food and eating likewise lie at the centre of Dalí’s thought and work. Bread was a recurrent image in his creations. The egg is another of his recurrent symbols. He also availed himself of images of fauna throughout his work: ants as a symbol of death, corruption and intense sexual desire; the snail as the head; and lobsters as a symbol of decadence and terror.

Dalí’s lifelong interest in the sciences and mathematics was often reflected in his work. His soft clocks have been interpreted as references to Einstein’s theory of relativity of time and space.