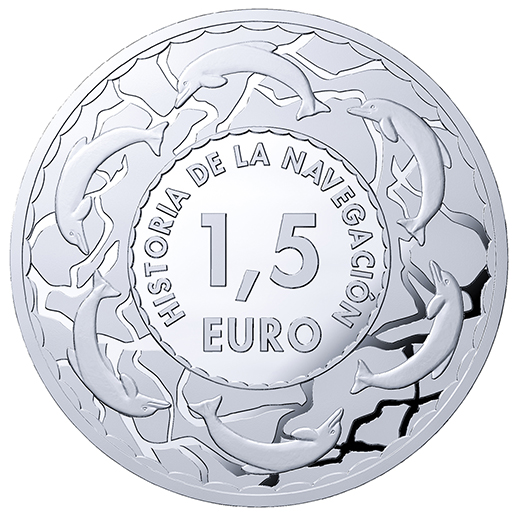 On the obverse is reproduced, in colours, a detail of the work "Vessel of the Scandinavian Vikings. Century X. Rebuilt by the Norwegian Government on the occasion of the Fourth Centenary of the Discovery of America ", by Rafael Monleón y Torres, which is kept in the Naval Museum of Madrid. On the right, the mint mark. Above the central image, in ascending circular direction and in capital letters, the inscription DRAKKAR SCANDINAVO. 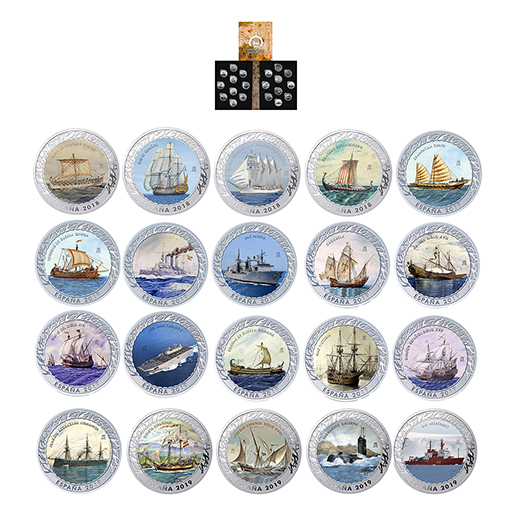 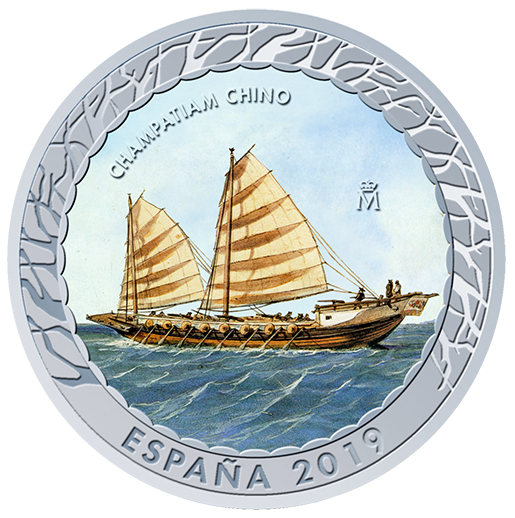 Era: from the 6th to the 11th century
Length: from 35 m o more, as well as smaller vessels
Propulsion: sail and oar

Description: from the 6th to the 11th centuries, the Nordic or Scandinavian peoples (Danish, Swedish and Norwegian), known generally as Vikings, were forced by demographic expansion and the poor quality of their lands to take to the seas to pillage and trade, two activities that became increasingly prominent as they proved to be very productive and beneficial.
The means they used to travel from the 7th to the 11th century was the vessel known by the name of Drakkar, an evolution of an Icelandic word for dragon that gave its name to the vessels, as their bows carried a type of figurehead resembling that mythical animal, or a snake called Snekars. The ships were long and slender, and their dimensions changed significantly from one model to another.

With low gunwales, no decks, and rows of seats for the rowers (up to 90 seats to man 40 oars), they were initially powered by these oars. They were built with overlapping planks of wood (a lashed hull system) and the joints were covered with moss, wool, or other components coated in tar in order to make them watertight. Their small draught (80 cm) allowed them to move in shallow waters and travel upstream in rivers, and their low weight (about 400 kilograms) made it possible to carry them on land if needed. The shields used in combat were generally placed facing out along the length of the tacks. Through observation and experience, the builders incorporated the keel, a piece that operated as a luff, and a starboard steer. Additionally, they used a mast (about 18 metres high) with a square sail made of wool or linen, painted in different colours and reinforced in leather, which improved navigation and allowed it to sometimes reach up to 14 knots.

There were three types of Drakkars: the ships used in wars and long voyages (Snekke); those for prestige or ceremonial rituals (Langskip), which were used on many occasions to bury the chiefs with their belongings by burning them at sea; and those used for exploration, trade, and coastal defence (Knarr), which were heavier and shorter.

Milestones: some famous Drakkars included the Ormen Lange (the Great Snake) of Olaf I from Norway (995-1000) and the Mora, the flagship of William the Conqueror (English king from 1066 to 1087) during the conquest of England. Erik the Red and Canute II the Great, Danish king from 1018 to 1035, famously had 1,400 ships of this kind that were capable of mobilising 126,000 men.