On the obverse, in the central area, a detail of the work entitled "Nao Victoria", which is preserved in the Naval Museum of Madrid, is reproduced in colors. In the upper left, the legend NAO VICTORIA. In the lower part, the legend ESPAÑA and the year of minting 2019. 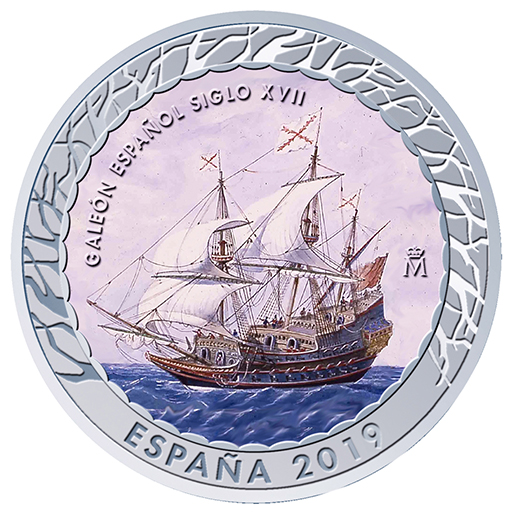 Period: Sixteenth century.
Length: 25 m Beam: 7.5 m.
Propulsion: Sails.
< Description: A descendant of the carrack, the nao was a vessel with a high length-to-beam ratio and was used mainly by the Iberian nations in trans-oceanic journeys at the time of the Voyages of Discovery. It was 200 to 600 tonnes in size and the Spanish one in particular featured a keel twice the size of the beam and was triple its length. It was fitted with square-rigged sails and, although it did not sail very close to the wind, it tacked with ease. High capacity in terms of artillery and cargo.

It is commonly believed that the Victoria was built in Zarauz and that it was named after the Church of Santa María de la Victoria de Triana, where Magellan, a Portuguese navigator commissioned by Spain, took the oath of allegiance to King Charles I. With a displacement of about 102 tonnes, it featured three masts: a foremast and a mainmast with crosstree rigging and topsails; and a mizzenmast with a lateen sail. It was probably armed with 10 culverins and carried a crew of 45. It cost 300,000 maravedíes.

Key events: Ranking amongst the most famous vessels in the world, the Victoria was the first to circumnavigate the globe, one of the most outstanding feats in history.

The Victoria was one of the five ships taking part in the expedition of Magellan, who had convinced King Charles I that the Spice Islands were in the Spanish hemisphere (Treaty of Tordesillas). He claimed that they could be reached by sailing westwards, striking a passage through the New World. The other four vessels were the Trinidad, the San Antonio, the Concepción and the Santiago.

The fleet set sail from Seville on August 10 1519 and on March 31 of the following year arrived at San Julian Bay (Patagonia), where it spent the winter. It was in these waters that an unsuccessful rebellion against Magellan took place. The Santiago was wrecked while the San Antonio deserted and returned to Spain.

After discovering the Strait, they crossed the vast ocean to which they gave the name of Pacific. They reached the Mariana Islands and later, the Philippines, where Magellan met his death in a revolt by the indigenous people of Mactan. The Concepción was set on fire by the crew, angered because the vessel was undermanned. Elcano then took command in the Moluccas and sailed across the Indian Ocean to Africa, skirting the Cape of Good Hope to reach Sanlúcar on board the Victoria on September 6th 1522 with just 18 of the 234 men who had set off three years before. Thus the first round-the-world voyage was completed.

After this voyage, the Victoria was sold for 106,274 maravedíes. Once repaired, it sailed twice to Santo Domingo but was lost during its second return journey to Spain.