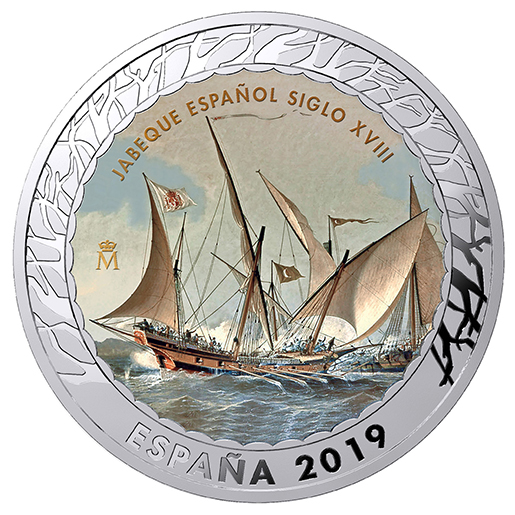 On the obverse is reproduced, in colour, a detail of the work "Antonio Barcelo with his mail xebec defeats two Algerian galleons in 1736", which is on display at the Naval Museum in Madrid. To the left, the mint mark. Above the central image, in a circular sense and in capital letters, the legend JABEQUE ESPAÑOL SIGLO XVIII. On the outer part of the coin, in a circular direction, there are aquatic motifs treated in a symbolic manner and, on the lower part, in an ascending circular direction and in capital letters, the legend SPAIN and the year of minting 2019. 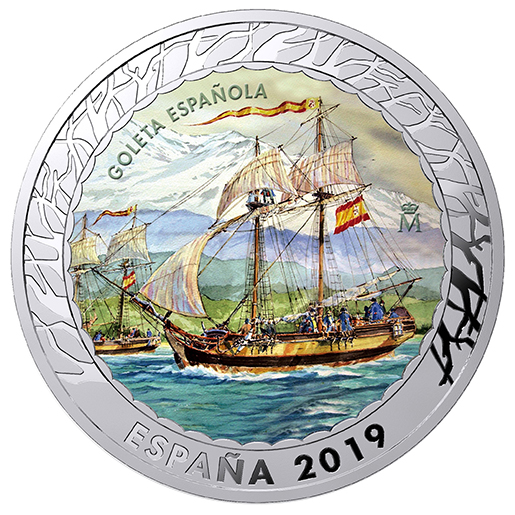 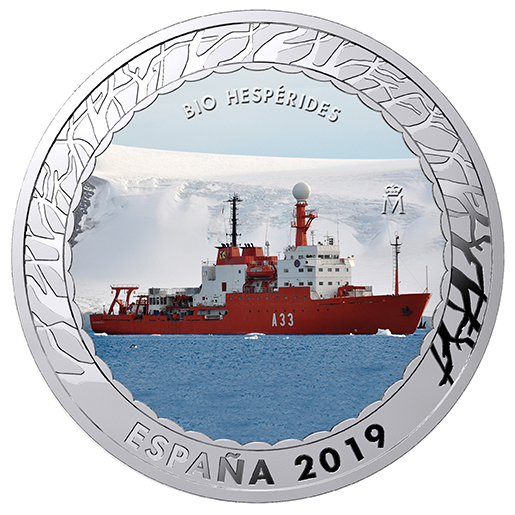 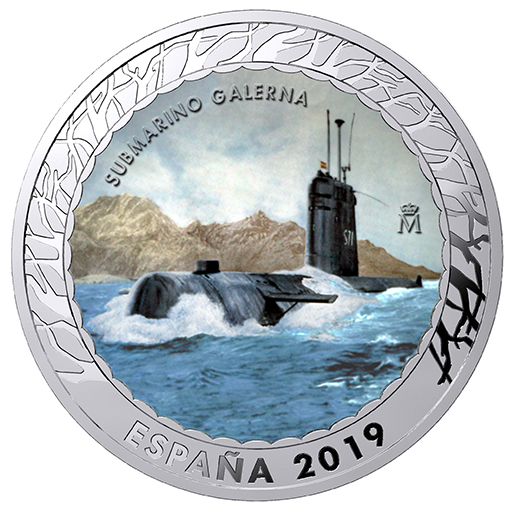 Description: A typically Mediterranean vessel, the xebec belongs to the galley family, starting out as a fishing boat to be used later by the Barbary pirates in their raids of other ships and in their razias or attacks on the Christian coasts of the Mediterranean.

The eighteenth-century Spanish xebec featured three masts, the foremast in freefall towards the bow, whilst the mainmast and the mizzenmast were kept vertical. The three masts carried lateen sails. The vessel was also powered by oars, with a robust bow carrying a ram endowed with a high thrust capacity. It had a long overhanging bowsprit to set the foremast sail to tack and an aft-set mizzenmast. In the Spanish Royal Navy, some of these vessels had polacre rigging and were known as round xebecs. In Spain, piracy was merely a marginal problem, addressed only during the breathing spaces in the wars in Flanders and the Americas.

Under the Bourbons, the Mediterranean Policy was brought into effect and when the Marquis of Ensenada heard that the Majorcan and Ibizan corsairs were using xebecs in their successful confrontations with the Barbary pirates, he decided to do away with the gallery squadron at Cartagena and started to arm the xebecs.

It was not long before this measure to fight against piracy proved to be the right one. In fact, including the ones built in Cartagena to the designs of Gautier and Juan del Real, those constructed in Palma de Mallorca, Havana and the last ones in Mahón, plus a number of captured xebecs, the Spanish Royal Navy boasted as many as 41 units. The first four, built in 1750, featured 24 cannons and their names, Galgo (greyhound), Cazador (hunter), Liebre (hare) and Volante (flyer), reflect their main attribute: speed. They also grew in size and the largest of them all, the Lebrel (sighthound), built in Palma de Mallorca in 1769 and armed with 32 cannons, reached a displacement of 680 tonnes.

By the early nineteenth century, there were just two large xebecs and a few small ones. In 1808, the xebec San Sebastián was sent to Cartagena de Indias, thence to Montevideo and later to Lima. However, on his return to Spain, the commanding officer warned of the hazards of sailing round Cape Horn against strong tailwinds. It remained in the Pacific until it was decommissioned in 1827. It was the Spanish Royal Navy’s last xebec.

Key events: Undoubtedly the most effective vessel the Spanish Royal Navy ever had, the xebec was victorious in all its battles and not one was captured or sunk by the enemy.