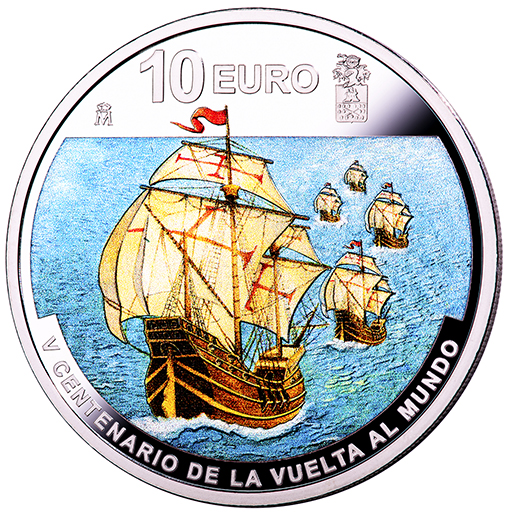 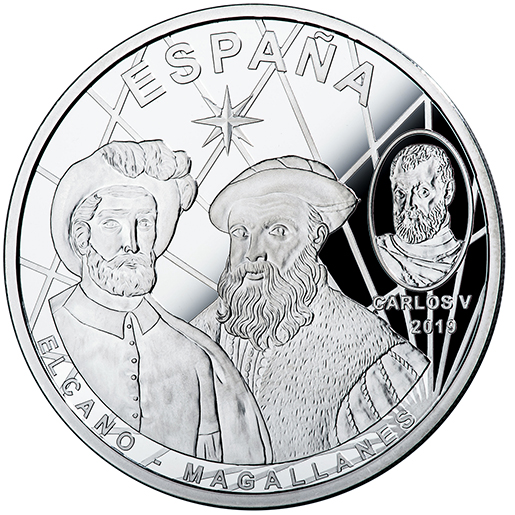 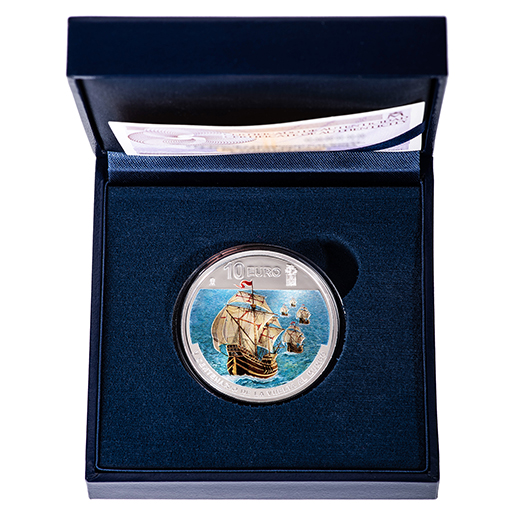 11  In Stock
Added to Your Shopping Cart
Share
To commemorate the 5th Centennary of the First Round-the-World Voyage, the Royal Mint of Spain issues a silver coin, being the first of the four silver coins that will be issued in the next four years (one per year).

On the obverse, two images of Juan Sebastián Elcano and Fernando de Magallanes, taken from the portraits of both housed at the Naval Museum of Madrid, are reproduced. Above these images, a rose of the winds. On the right, inside an oval, detail of the head of the sculptural work entitled "Carlos V", made by Leone and Pompeo Leoni, which is kept in the Prado Museum, Madrid; below, the legend CARLOS V and the date 2019. On the top of the coin, the legend SPAIN. In the lower part of the coin, the legends ELCANO and MAGALLANES, separated by a hyphen. Occupying all the bottom of the coin, some lines as a grid of winds.

On the reverse, a scene with five naves crossing the sea is reproduced in colours. On the top of the coin, the face value of the piece, 10 EURO. On the left, the mint mark; on the right, the coat of arms of Juan Sebastian Elcano. In the lower part of the coin the legend V CENTENARY OF THE ROUND-THE-WORLD VOYAGE.
You may also be interested in these products:
Select Options 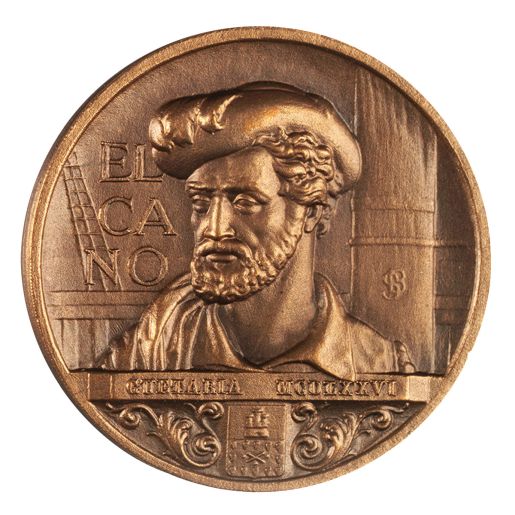 The expedition of Magellan and Elcano was a 16th century maritime expedition financed by the Spanish Crown and captained by Ferdinand Magellan. This expedition, led by Juan Sebastián Elcano on his return, completed the first circumnavigation of the Earth in history.

The expedition had the purpose of opening a commercial route with the Pacific islands through the West, looking for a passage between the Atlantic Ocean and the Pacific Ocean. It was formed by five ships that departed from Sanlúcar de Barrameda on September 20, 1519. The fleet, after having explored the American coastline south of Brazil for months, managed to cross the Strait of Magellan on November 21, 1520. In his voyage through the Pacific they reached the Philippine Islands, where, on April 27, 1521, Fernando de Magellan died in the battle of Mactán. The expeditionary continued the navigation to the Moluccas, objective of their trip, where they chose Juan Sebastián Elcano to captain the return trip. Sailing westward through the Indian Ocean and around Africa, on September 6, 1522 the Victoria, the only ship left on the expedition, returned to Sanlúcar de Barrameda with its cargo of spices, becoming the first ship in history to circumnavigate the world.

The expedition was financed mainly by King Charles I of Spain and V of the Holy Roman Empire, in the hope that he would discover a profitable route west to the Moluccas, as the eastern route was controlled by Portugal under the Treaty of Tordesillas. Although the expedition found a route, it was much longer and more arduous than expected and was therefore not commercially useful. However, the first circumnavigation has been regarded as a great achievement in navigation and had a significant impact on European understanding of the world.