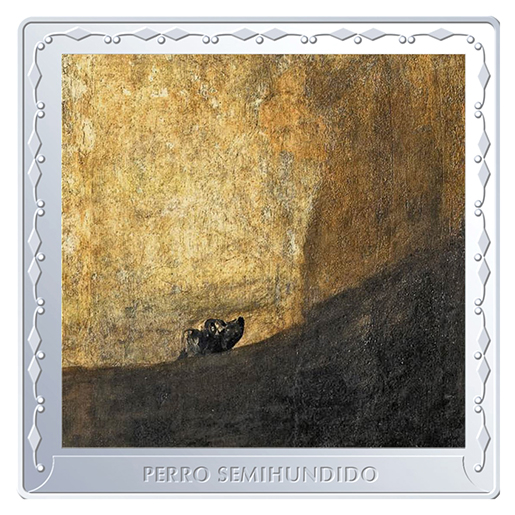 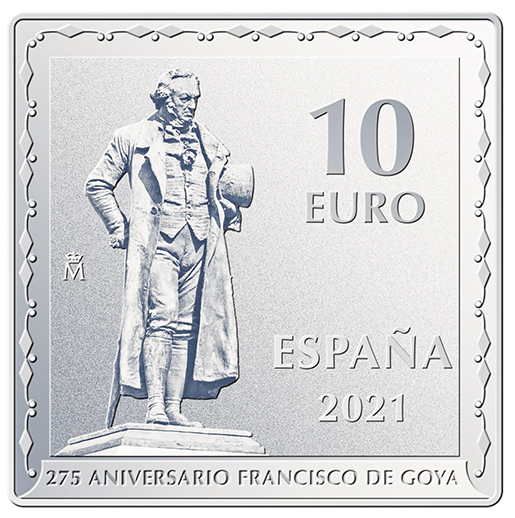 For the year 2021, it is agreed to issue, mint and put into circulation a set of collector coins to commemorate the 275th anniversary of the birth of Francisco de Goya.

On the obverse, a reproduction in colour of the work The Drowning Dog, executed by Francisco de Goya y Lucientes between 1820 and 1823 and now held at the Prado, Madrid. The motifs and legends are surrounded by an allegorical border alluding to the Goyaesque strawberry girl (her hair loosely held in a snood decorated with strawberries).

On the reverse (common to all three pieces), the statue of Goya produced by Mariano Benlliure Gil in 1902 and situated opposite the Goya Entrance at the Prado, Madrid. The motifs and legends are surrounded by an allegorical border alluding to the Goyaesque strawberry girl.

The mural paintings that decorated the house known as “la Quinta del Sordo,” where Goya lived have come to be known as the Black Paintings, because he used so many dark pigments and blacks in them, and also because of their somber subject matter. The private and intimate character of that house allowed the artist to express himself with great liberty. He painted directly on the walls in what must have been mixed technique, as chemical analysis reveals the use of oils in these works.

The Baron Émile d´Erlanger acquired “la Quinta” in 1873 and had the paintings transferred to canvas. The works suffered enormously in the process, losing a large amount of paint. Finally, the Baron donated these paintings to the State, and they were sent to the Prado Museum, where they have been on view since 1889.

This scene decorated one of the walls alongside the door of the upper floor. The dog´s head appears behind a large area of color which Goya didn´t define. He is in front of an empty and naked space and looks forward toward something or someone outside the composition. This piece has been related with the idea of the inevitability of death and is, beyond doubt, the most enigmatic of the Black Paintings.

Despite the multiple explanations offered by art historians, these works continue to be mysterious and enigmatic, yet they present many of the esthetic problems and moral considerations appearing in Goya´s works. The mural paintings from “la Quinta del Sordo” (the Black Paintings), have been determinant in the modern-day consideration of this painter from Aragon.

The German Expressionists and the Surrealist movement, as well as representative of other contemporary artistic movements, including literature and even cinema, have seen the origins of modern art in this series of compositions by an aged Goya, isolated in his own world and creating with absolute liberty.