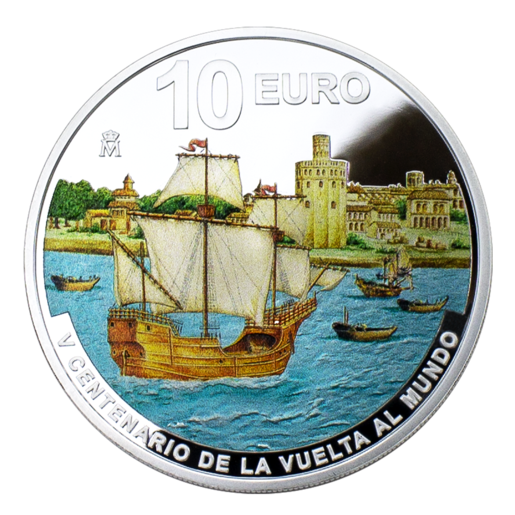 To commemorate the 5th Centenary of the Round the World Race, the Royal Spanish Mint is issuing a silver coin of 8 Reales, the fourth and last of the four issues of this same metric that will be issued between 2019 and 2022, one each year to commemorate this event.

The obverse shows the image of Juan Sebastián de Elcano, taken from the portrait in the Naval Museum in Madrid. Above this image is a compass rose. On the right, detail of the coat of arms of Juan Sebastián de Elcano. At the top of the coin, the legend ESPAÑA 2022. On the lower part of the coin, the legend "Primus Circundedisti me" awarded to him by Emperor Charles V as a reward for his feat, with lines in the form of a grid of winds in the background.

The reverse shows an image commemorating the arrival in Spain of the Nao Victoria in September 1522, under the command of Juan Sebastián de Elcano and the last 17 survivors of the expedition, who completed the first round-the-world voyage. At the top left the legend 10 euro and at the right the crowned M (mintmark). At the bottom of the coin, the legend V CENTENARIO DE LA VUELTA AL MUNDO.